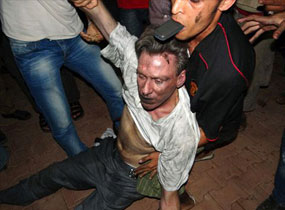 A shocking report has come from the Tayyar News Service in Lebanon that murdered United States Ambassador to Libya, J. Christopher Stevens was raped before he was killed. The article was originally printed in Arabic and it translates as follows:

“The U.S. ambassador to Libya was raped sexually before killing by gunmen who stormed the embassy building in Benghazi last night to protest against the film is offensive to the Prophet Muhammad (pbuh),” The sources said that “Ambassador was killed and representation of his body in a manner similar to what happened with Gaddafi, such as murder. “

Additional information revealed that Libyan Security personnel may have disclosed the whereabouts of the Ambassador to the attackers, after Ambassador Stevens was moved to a safe location.

“Wanis al-Sharef, a Libyan Interior Ministry official in Benghazi, said the four Americans were killed when the angry mob, which gathered to protest a U.S.-made film that ridicules Islam’s Prophet Muhammad, fired guns and burned down the U.S. consulate in Benghazi.”
“He said Stevens, 52, and other officials were moved to a second building — deemed safer — after the initial wave of protests at the consulate compound. According to al-Sharef, members of the Libyan security team seem to have indicated to the protesters the building to which the American officials had been relocated, and that building then came under attack.”

There is a long history of Islamist extremists mutilating their victims. When Pakistani Muslim terrorists attacked the Chabad Jewish center during the devastating terror attacks in Mumbai, India, Rabbi Gavriel Holtzberg and his wife, Rivka, were both tortured, raped, and their bodies were desecrated. According to the Mumbai Police, the Rabbi was castrated while still alive. “Even the Rabbi and his wife at Nariman House were sexually assaulted and their genitalia mutilated,” said a senior officer of the investigating team.
Many videos exist of kidnappers reciting verses from the Qur’an before decapitating their victims. The desecration of a victim’s body is justified by Muslim extremists, who base their behavior on Mohammed’s declaration to Muslims to humiliate and subdue non-believers:

” Muslim recorded from Abu Hurayrah that the Prophet said, ‘Allah said, until they pay the Jizyah, if they do not choose to embrace Islam, with willing submission, in defeat and subservience, and feel themselves subdued, disgraced, humiliated and belittled. Therefore, Muslims are not allowed to honor the people of Dhimmah or elevate them above Muslims, for they are miserable, disgraced and humiliated.’ “

In Libya, there is ample evidence that former ruler, Col. Moammar Gadhafi was tortured and sexually violated before being shot in the head by his captors. Gruesome videos have surfaced showing the former Libyan leader pleading for his life, while being beaten, and sexually abused. One very disturbing video is described in the following report:

“Meanwhile, a new video has sparked outrage across the world, over what is believed to be a gross violation of human rights. A frame-by-frame analysis of the video clearly shows a rebel trying to insert an object into Gadhafi’s rear end.

More information should become become available over the next few days. What we know at this time is that the accusations are based on a report from a legitimate Lebanese news organization and we know this kind of despicable behavior has occurred in the past.
Meanwhile, friends and co-workers continue to remember the dedicated, hardworking professional diplomat. Hillary Clinton, The U.S. Secretary of State, paid tribute to Ambassador Stevens:

“I had the privilege of swearing in Chris for his post in Libya only a few months ago. As the conflict in Libya unfolded, Chris was one of the first Americans on the ground in Benghazi. He risked his own life to lend the Libyan people a helping hand to build the foundation for a new, free nation. He spent every day since helping to finish the work that he started.”

www.inquisitr.com
This item is available as: html | pdf